Masters & Pelavin gallery is proud to present the exhibition Silence, curated by an artist we represent, Jaanika Peerna.  The exhibit features the work of an international group of artists. Silence includes diverse media such as video, sculpture, painting, photography, site specific work and drawing by Peter Baumann, Anne Lindberg, Janine Magelsen, Kazumi Tanaka, Thomas Fougeirol, and four Estonian artists, Kaido Ole, Jaan Toomik, Jaanika Peerna, and Krista Mölder. Each work reflects the theme of silence in a unique and complementary way. The exhibition was born in collaboration with Olga Temnikova of Temnikova and Kasela Gallery.

Within Western culture, silence is defined as the relative or total lack of audible sound. By analogy, the word silence may also refer to any absence of communication, even in media other than speech. Yet, silence is used as total communication, in reference to non verbal communication and spiritual connection. It is the absence or omission of mention, comment, or expressed concern. A freedom from the onslaught of thoughts and thought patterns. A state of being forgotten. A bringing to rest or stillness. A hush. A quell. A muzzle.

What can silence mean in a world as noisy as ours, to minds as filled with images, thoughts, and plans as the one around us?  One often hears that there is no such thing as silence, as John Cage found out when he entered the anechoic chamber at Harvard, a room designed to research the complete absence of sound.  He heard the beat of his heart and the firing of neurons in his brain.  We can barely attain silence but we continue to quest for it, and we are in awe when we find it.  As Max Picard writes in his eloquent and spiritual book The World of Silence in 1952, “When silence is present it is as though nothing but silence has ever existed.” As Picard continues, “Silence looks at man more than man looks at silence.”  It is as if the world watches us, looking for all those things of which we cannot speak.  Each artist in this exhibition offers us a work which comments on a different aspect of those things that can be perceived only in quiet, or what is impossible to say, or what is forbidden to be said.
Kaido Ole presents two large paintings of speakers, precisely rendered on canvas, an object designed to represent sound, but here as a graphic image of what we cannot hear.  Ann Lindberg’s white pillows embroidered with poems by Theodore Roethke suggest words swirling in our heads lay down to sleep in a land of quiet reserve. Peter Baumann’s video Das Schweigen presents an awkward lack of conversation in a café between a man and a woman—are they lovers? mother and son? brother and sister?—about to embark on some sharing of intimacy or importance that never quite happens, as each seems desperately afraid to offer up any word at all. Compare this to Jaan Toomik’s video of a man standing in front of a wide, noisy waterfall.  Except we hear no sound at all.  Until he opens his mouth—then the rushing water noise appears.  He closes his mouth and walks off the screen.  Does the water fall in the forest if no one is there to hear it?

Kazumi Tanaka has laboriously strung a tiny piano with strands of her own hair.  And with even more effort, she has wrapped her hair onto the grooves of a round record on a miniature turntable.  Neither could possibly make any sound save the exasperation of the effort required to produce the works.  Jaanika Peerna’s Murmuring Silence takes the artist’s characteristic dense improvised lines and pile them up, layer upon layer, into a great circle where individual mark dissolves in a black hole of graphite from which there is no escape.
Krista Mölder’s still life like photographs offer us meditations between 2D and 3D. In quietness a 2D surface has been folded into a origami bird whereas on the other photo what appears to be an empty minimalist space flips into a flat surface under our quiet gaze. Mölder has found silence in the minimalism that is space as described by Georges Perec.  For what is space but “the impalpable, the virtually immaterial, what we move about in the midst of, our ambient milieu… To live is to pass from one space to another, while doing your very best not to bump yourself.”
Janine Magelsen makes work that can be easy to bump into, tiny white packages and rectilinear shapes that seem to grow right out the gallery walls.  What are these things? Are they meant to be there? How are we to observe them? Should we silently rub our fingers on them so we learn where the works end and the empty walls begin? This white is ultimately contrasted with the grand and tremulous blacks of Thomas Fougeirol’s large, dark painting, which he tells us is “to be crossed like territories,” some grand foggy map of a world which can be traversed no other way but in this multitextural surface that can only be seen as you walk around it so the changing light alters how we see the borders and shapes that are reflected off the surface of the canvas. We quiet down as we search the territory of Fougeirol’s paintings.

The exhibition is putting forward following question: is silence absence or presence, necessity or impossibility? 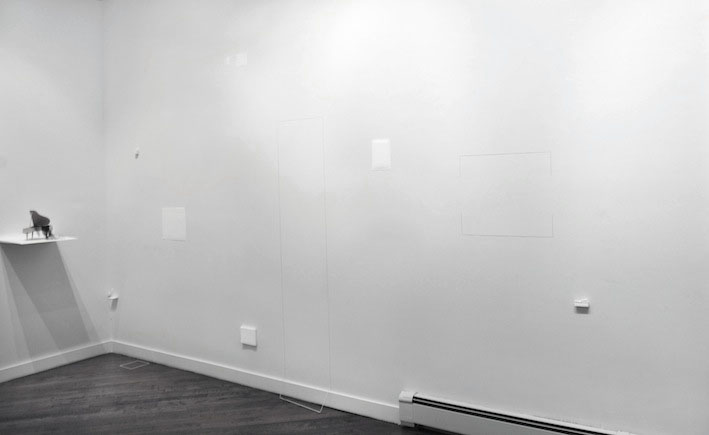 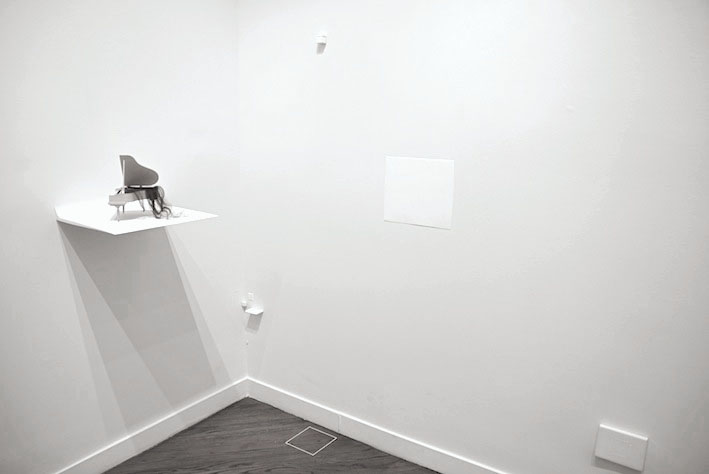 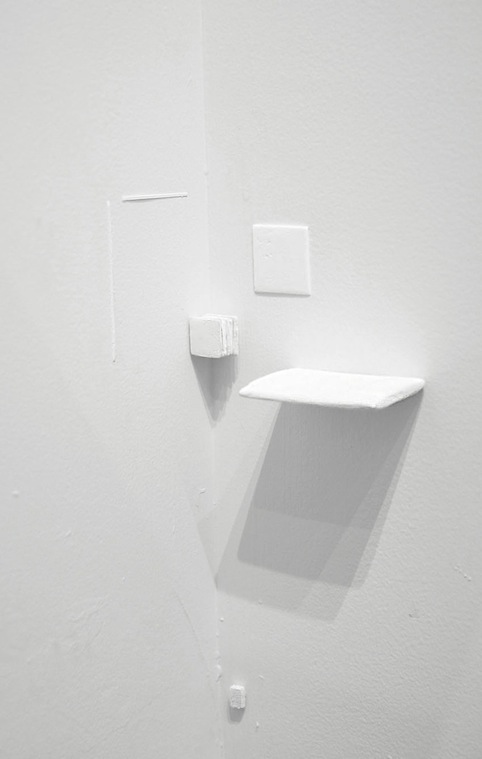 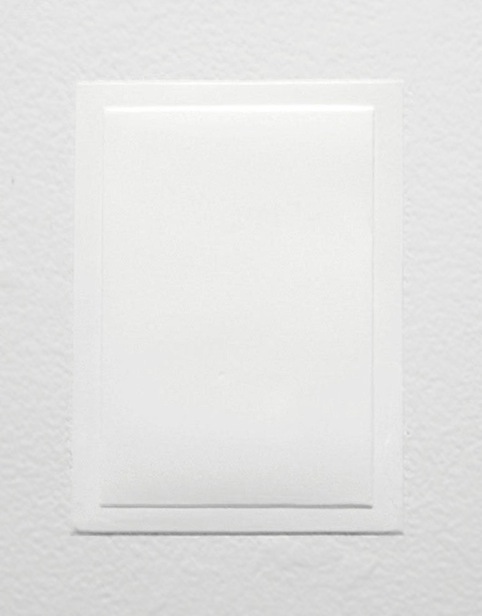 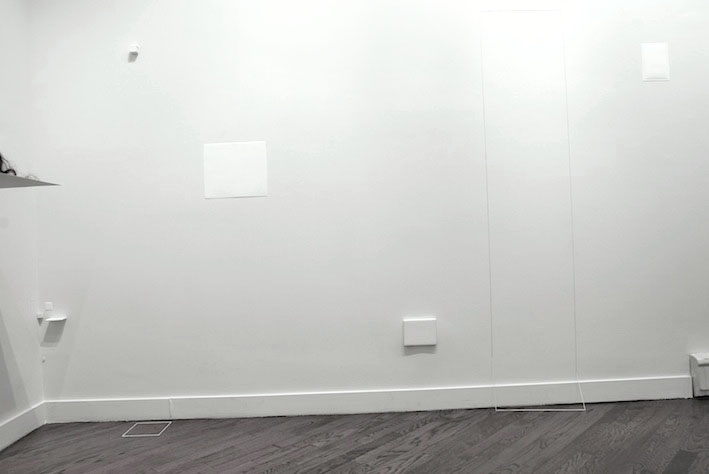 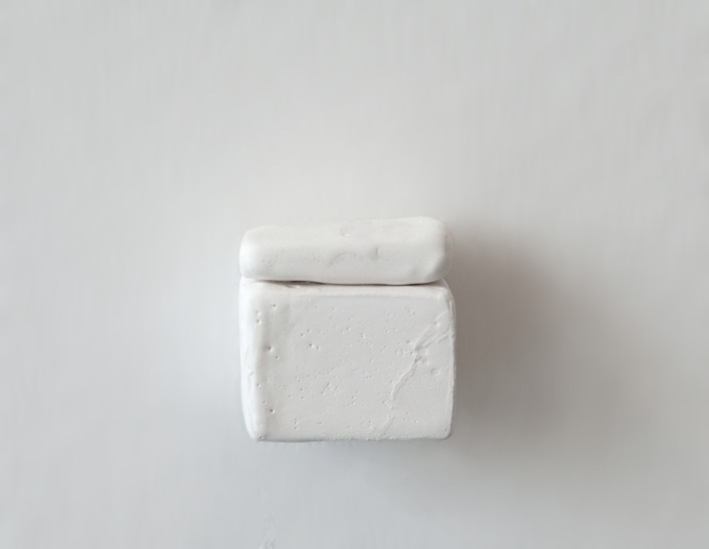